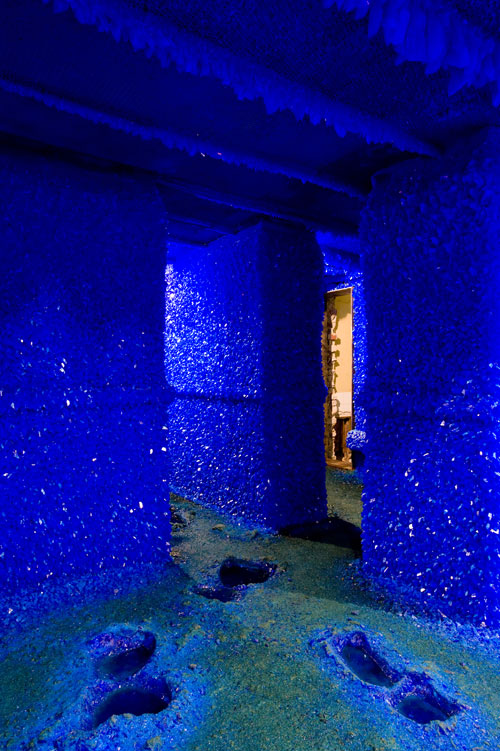 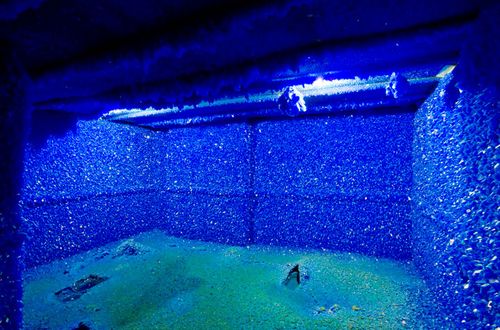 Roger Hiorns created a room out of crystals he did this by covering the walls of the apartment in plastic sheeting. And then poured 80,000 litres of copper sulphate solution through a hole in the ceiling. After a few weeks the temperature of the solutions dropped and crystals began to grow.

I thought this piece was really cool. Its a bunch of video diaries that have been posted on youtube.

“The project is a meditation on the contemporary plight of democratic, participative media and the fundamental human desire to be heard. The artist Christopher Baker, who originally trained as a scientist, is inspired by the interconnectivities – visible and invisible – present in the 21st-century urban landscape and is interested in the  practical implications of our increasingly networked lifestyles: ‘Primary to this task is an exploration of the ways we imagine and represent ourselves before (potentially massive) audiences and the ways we navigate and abide in public space. With these interests at heart, large-scale video projections allow me to create works that fuse existing physical spaces with more ephemeral digital elements, resulting in revelatory and sometimes disorienting forms.’”

Here is a video of the installation

This guy is a really great installation artist here is his website http://www.davidbatchelor.co.uk/

This section goes through the process of creating a transfer using various mediums. The one we used in class included hand sanitizer. In this process you entirely coat a piece of printmaking paper with hand sanitizer. You then take a transparency with a positive image on it and place it face down onto the paper. Using a rolling device or credit card apply pressure to the back of the image. It is also recommended that you use saran wrap in order to protect your print. You then lift the transparency off of the paper and the image will have transferred from transparency to the paper. Lay flat to dry.

During Solar printing you can use the double exposure technique with an aquatint screen. this will prevent the polymer emulsion from wearing away or washing out. First you must double expose the plate with an aquatint screen. This step allows you to retain extensive areas of deep black in the intaglio image. In print making this process is referred to as an “open-bite”. Basically the aquatint provides a textured layer which will suck up the ink in areas of white space creating a better tonal range.

This chapter was particular helpful. While creating my platinum prints I had metallic looking areas in my darker values and Ken and I both were unable to identify the issue. However, it appears this effect is called Bronzing. This is a result of either dampness in the paper or of an inappropriate negative density for the process. Another reason could be that the sensitizer was puddled up on the paper and drying too thickly. This is probably what happened to one of my prints.

Paper is very important when doing platinum printing. The paper must be free of impurities and with a surface that is compatible with your intentions. Ideally you want 100 percent rag with no brighteners or buffering with a PH level between 5.5 and 7.5. Also the paper must be sturdy due to the long rinsing time. Handmade paper can often fall apart during the wet stages. Also it is better to rip the paper rather than cut with a metal knife because shavings can get into your paper and effect your print. It is better to trim the paper after the process is complete.

This chapter goes through the process of creating photograph cyanotypes on a large piece of fabric using your body. I found it amusing that he suggests using the ocean as your rinse. Which totally makes sense I just would have never thought of that. I also found it helpful that if you make cyanotype clothing its better to not use detergents or laundry soaps containing phosphates. Instead it is better to use a soap such as Ivory or Dove. These products will not turn your cyanotype clothing yellow like other detergents will.

This section describes the processes you take in order to change your blue cyanotype image into a cyanotype with different colors. The most interesting process was the Basic Tea Toner. You take basic tea and create a very strong solution in hot water. You then simply immerse your print in the tea. This will turn your highlights into a tan color and the blue with take on a slightly warmer hue. Using green and herbal teas without tannic acid in them does not work as well. However you can boil onion skins which will create a bronzing effect.

Anna Atkins was one of the first people to utilize the cyanotype process. She catalouged british algae in her book British algae: Cyanotype Impressions. Atkin’s father was a botanist which inspired her love for science. Anna learned the cyanotype process from family friend Herschel. Anna Atkins collected algae , ferns, feathers, and water weeds and much like a scientist cataloged each one. She then created beautiful cyanotypes by contact printing the objects directly onto the cyan covered paper.